Variable renewables VRE in Japan exceeds 10%, and the reduction of dependence on fossil fuels is being hastened.

By month, May 2021 had the highest share of electricity generated from renewables, reaching 31.1% in Figure 3. In May 2021 of that year, the share of hydropower was higher than usual at 12,7% due to the amount of water output, but in April the share of solar PV was higher at 13.0% and the share of VRE reached 14.0% compared to 14.5% in the previous year.

Figure 1: Source of power generation in Japan as preliminary data for 2021
Source: Compiled by ISEP based on electricity survey statistics, etc. 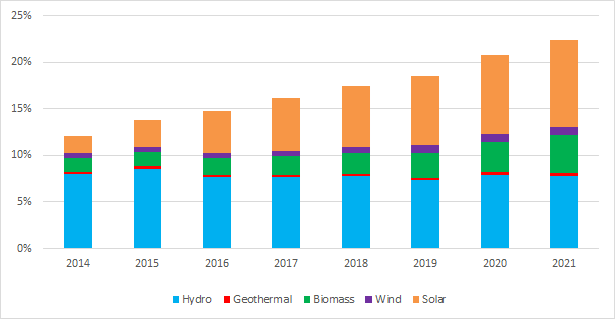 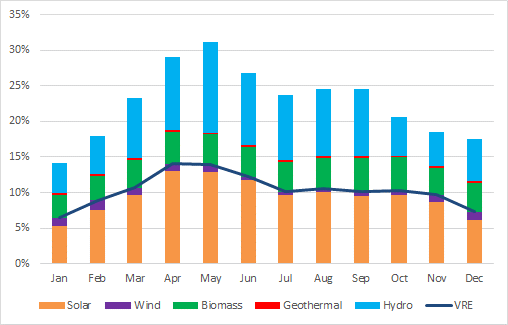 Comparison of the share of renewable energy with other foreign countries

The European Climate Law was approved by the European Parliament in June 2021, which aims for ambitious greenhouse gas emission reduction targets in order to achieve the Green Deal initiative for climate neutrality and green recovery in 2050.[4]  In it, the reduction target for 2030 was significantly raised from 40% to 55%. The EU’s Renewable Energy Directive RED III is being reviewed along with the development of a new policy package to achieve the 55% reduction. The NECPs (National Energy and Climate Plans) are already in place, but they will need to be topped up as emission reduction targets are raised. Furthermore, with Russia’s military advance into Ukraine, Europe’s dependence on Russian natural gas and other energy sources is becoming a reality, and the need for an immediate energy transition is pressing. The goal is to reach an even higher target for 2030.

In Denmark, the share was already 17% in 2000, exceeded 30% in 2010, reached 74% in 2021, and aims to exceed 100% renewables electricity by 2030.[5]  In Denmark, 20 years of experience since 2000 in the power system has resulted in integrated solutions to provide more than 50% of electricity from variable renewables VRE from wind and solar in the power system and power market.

In China, in addition to hydropower, wind and solar power have been rapidly introduced over the past decade, and by 2021, wind power and solar power will account for 7.8% and 3.9% of annual electricity generation, respectively, and the VRE share has already reached 11.7%.[7]  The share of renewables, including hydropower, in total electricity generated will reach 27.7%.[8] 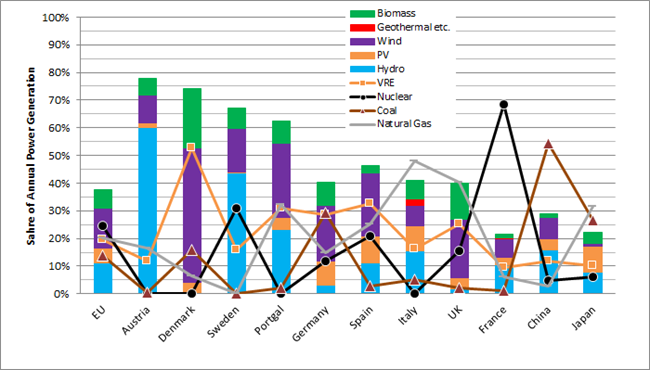 Figure 5: Comparison of share of renewables and other energy sources in electricity generation in European countries and China/Japan (2021)
Source: ISEP, based on data from Ember, China Energy Potal, Electricity Survey Statistics, etc. 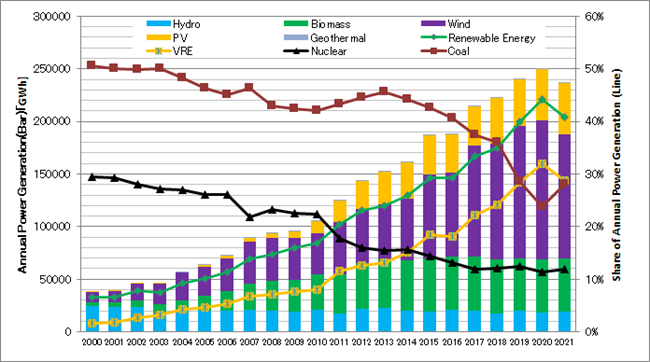 Share of renewables in Japan’s domestic electricity supply and demand

The data is based on monthly electricity supply and demand data published by 10 general transmission and distribution companies for each area of Japan, and is compiled for the year 2021, focusing on the share of renewable energy to grid electricity demand. ISEP’s Energy Chart provides an interactive and easy-to-understand analysis of electricity supply and demand data in Japan using a variety of graphs from publicly available data. [9]

By electric power utilities, TSOs, area, the Hokuriku area had the highest average share of renewables in annual electricity demand in 2021 at 35.6%, but solar power and wind power accounted for the largest shares at 4.7% and 0.9%, respectively, while hydro power accounted for 28.2% in Figure 9. Even in the Tohoku area, which has the second largest share of renewables, the share will reach 35.1% by 2021, with solar power increasing to 10.4% from 9.0% the previous year. The share of wind power also increased to 4.4% from 4.3% the previous year, bringing the VRE share to 14.7%, making the VRE share of wind power as high as that of the Hokkaido area among all areas in Japan. The Tohoku area also has the highest share of biomass power generation in Japan at 4.0%, and the geothermal power generation share of 1.3% is the highest in the country, along with the Kyushu Electric Power area.

In 2021, the average share of renewables in eastern Japan as a whole is 19.4%, lower than the national average of 20.2%. This is largely due to the fact that the Tokyo Electric Power Company(TEPCO) area accounts for only 13.6%. In the TEPCO area, solar PV power accounted for 7.6%, higher than the 4.8% share for hydroelectric power. In the Hokkaido area, the share of renewables was 30.0%, but the VRE share reached 13.3% with a high share of wind power (4.4%) compared to solar power (8.9%).

In the Kyushu area, the maximum percentage of hourly generation for renewables in 2021 was only 90.7%, with a maximum of 81.8% for solar power and 5.1% for wind power. On the other hand, VRE curtailment was the only one implemented in the Kyushu area, with the VRE curtailment rate for the entire year at 4.4%, up from 3.8% in the previous year. In the Kyushu area, 10.74 GW of solar power generation had already been connected to the power grid under the FIT system as of the end of December 2021, and together with 630 MW of wind power generation, the VRE connected capacity exceeded 11 GW in Figure 11. In addition, about 4 GW of nuclear power generation is in operation at any given time, and the VRE output curtailment is also greatly affected by the operation of these nuclear power plants. It is increasingly likely that other areas will also experience VRE curtailment in the future. Although the rules for VRE curtailment have been reviewed and the use of online control of VRE has been progressing, the rules have become more complex and have not been optimized for the entire power system. Inter-regional interconnection lines are now being used effectively, and further improvement and enhancement of operations are required. The use of pumped hydro storage and storage batteries is effective, but further promotion and optimization of online control of VRE, review of minimum output of thermal power generation, DR (Demand Response), VPP (Virtual Power Plant), etc. are required.[10] 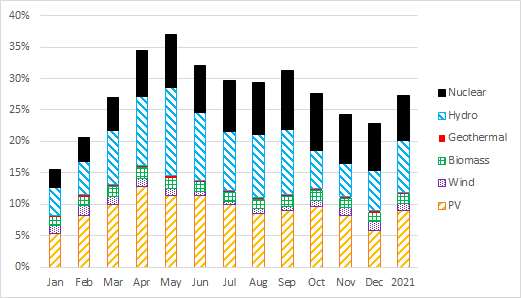 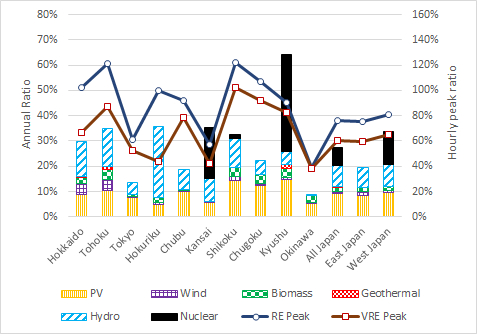 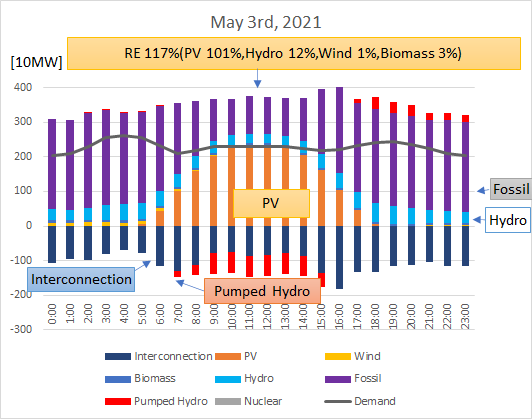 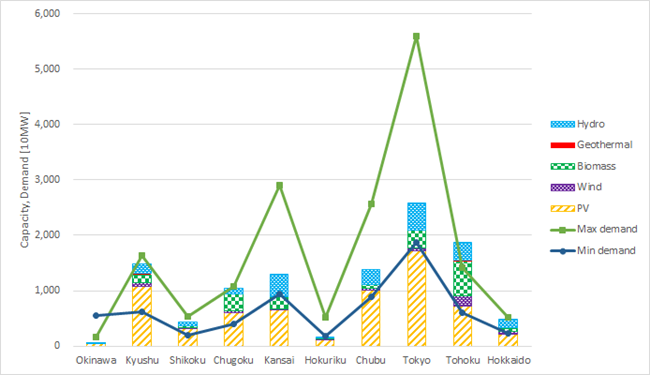 Figure 11: Grid connections in TSO areas (by end of December 2021)
Source: Compiled from data of general transmission and distribution companies

[2] The estimates use the previous year’s values for the estimated on-site consumption of private power generation and residential PV after October 2021, but the impact is expected to be small.

[5] Danish Energy Agency, “The development of flexibility and its role in the Danish electricity system,” https://ens.dk/sites/ens.dk/files/Globalcooperation/development_and_role_of_flexibility_in_the_danish_power_system.pdf 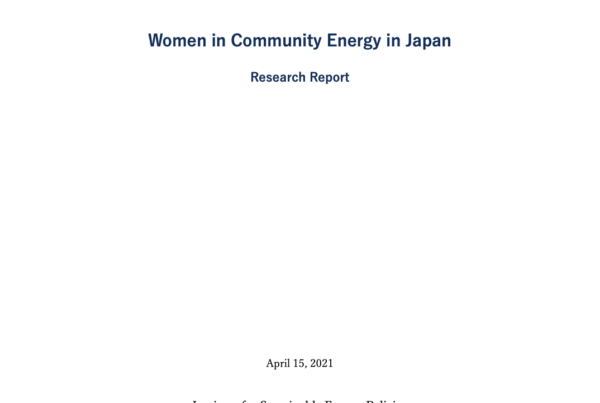