ISEP collected and summarized the data on renewable energy power in Japan. The preliminary report shows the share of electricity generated by renewable energy reaches 17.4%, the PV to 6.5%.

Based on power survey statistics [1], FITs, and power supply and demand data for the whole country, we estimated the share of all power generation (including self-consumption) in Japan in 2018 by power supply. However, the previous year’s figures are used to estimate the amount of home-use solar PV from October 2018. In addition, for wind power generation, the amount of power transmission by the FIT system is used (because it is considered that there are duplicates in the figures of the power survey data).

As a result, the share of total renewable energy generation in Japan in 2018 (calendar year) increased to approximately 17.4% from 16.4% in the previous year as shown in Table 1, and Figure 1. The proportion of renewable energy, which was about 12% in 2014, reached more than 17% with an increase of about one point each year (Figure 2). Among them, the amount of solar PV power generation has increased from 5.7% in the previous year (2017) to 6.5%, which is very close to the target value that the 5thBasic Energy Plan [2] by the government assumes in fiscal 2030. Together with the share of wind power 0.7%, the share of VRE has increased from 6.3% in the previous year (2017) to 7.2%.As for renewable energy sources other than solar PV, wind power and biomass power generation increased by about 10%, but hydropower and geothermal power remained the same percentage due to the relationship between the amount of water discharge and the amount of steam.

May has the highest percentage of renewable energy among the year, reaching about 25% (Figure 3). The share of hydropower is high at 12.5% because of the amount of water discharge, the percentage of solar PV is at 9.2%, and the share of Variable Renewable Energy (VRE) has reached about 10%.

Table 1: Transition of the share of renewable energy to total power generation in Japan | Source: ISEP based on statistics of METI, etc. 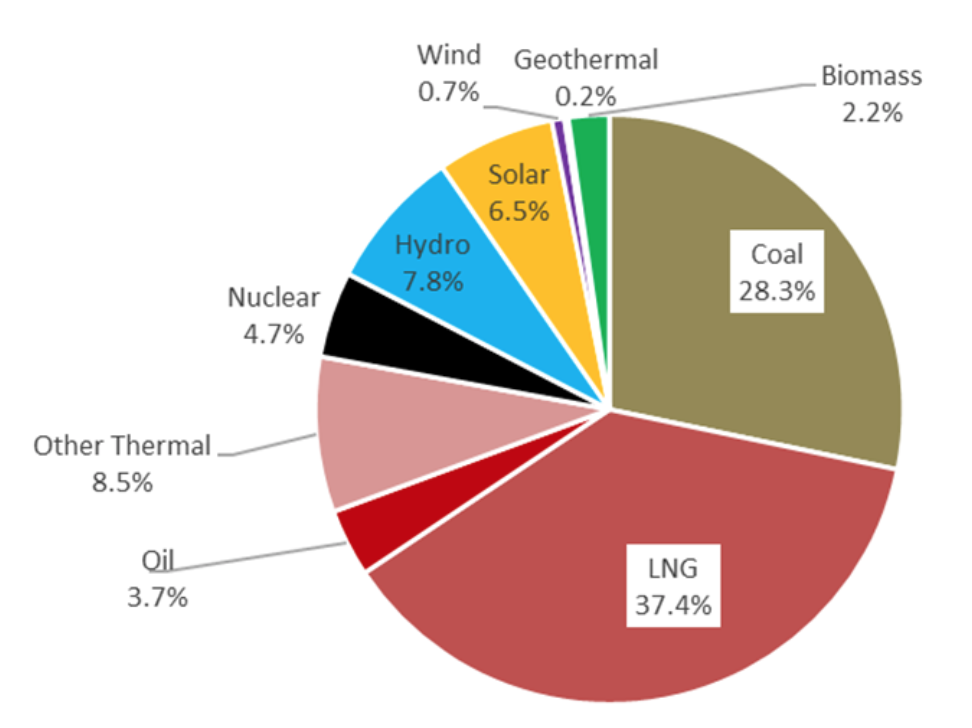 Figure 2: Trend of the share of renewable energy to the total power generation in Japan | Source: ISEP based on data of METI 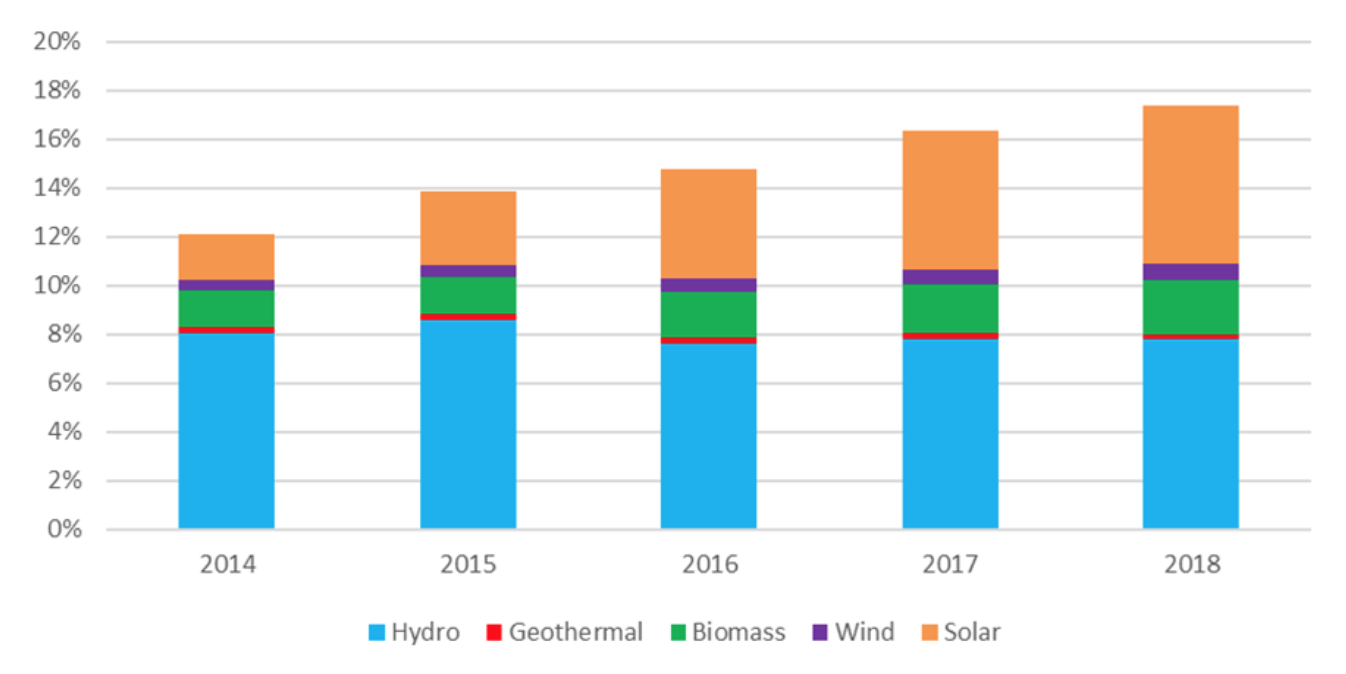 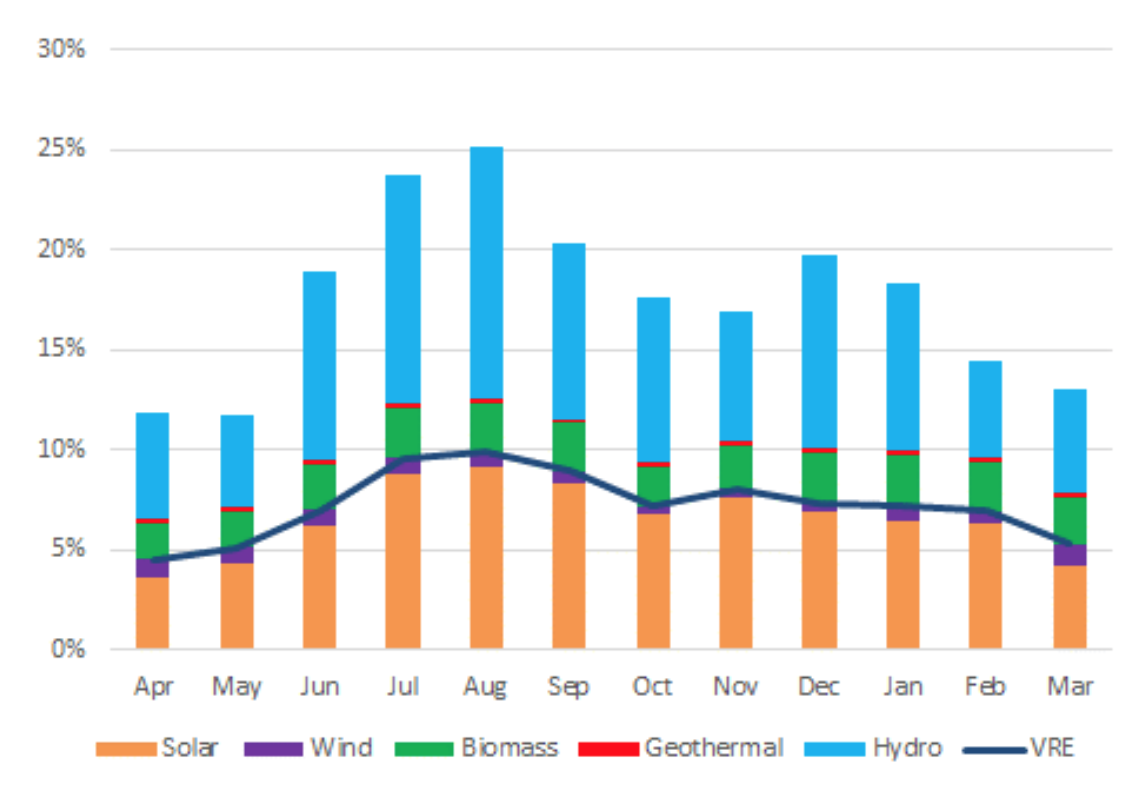 From fiscal 2016, based on laws and regulations, general transmission and distribution 1 hour data of electricity supply and demand for 10 power utility company area have been disclosed by each TSO(Transmission System Operator) [3]. The supply and demand data that has been announced by TSOs every three months has been released monthly from October 2018. In Europe, where the power market is in place, there are already many web sites where TSO publishes data in near real time and visualizes the data in an easy-to-understand manner. In October 2018, the power curtailment of solar PV and wind power was carried out for the first time in the area in Kyushu. Japan is also required to disclose power supply and demand data as soon as possible. ISEP’s visualization site “ISEP Energy Chart” allows you to analyze data in an easy-to-understand manner on various graphs interactively from published data [4].

Furthermore, in the Hokkaido area, the share of wind power is the highest in Japan, reaching 3.2%, as opposed to 4.6% of solar PV, while hydro power accounts for a large proportion of 16.7% (total renewable energy is 25.1 %). Although the share of renewable energy is 15.2% below the national average on average in East Japan as a whole, the fact that the Tokyo Electric Power Company (TEPCO) area remains at 10.0% is a major factor. In this TEPCO area, solar PV is characterized by 5.3%, which exceeds 4.2% of hydropower. 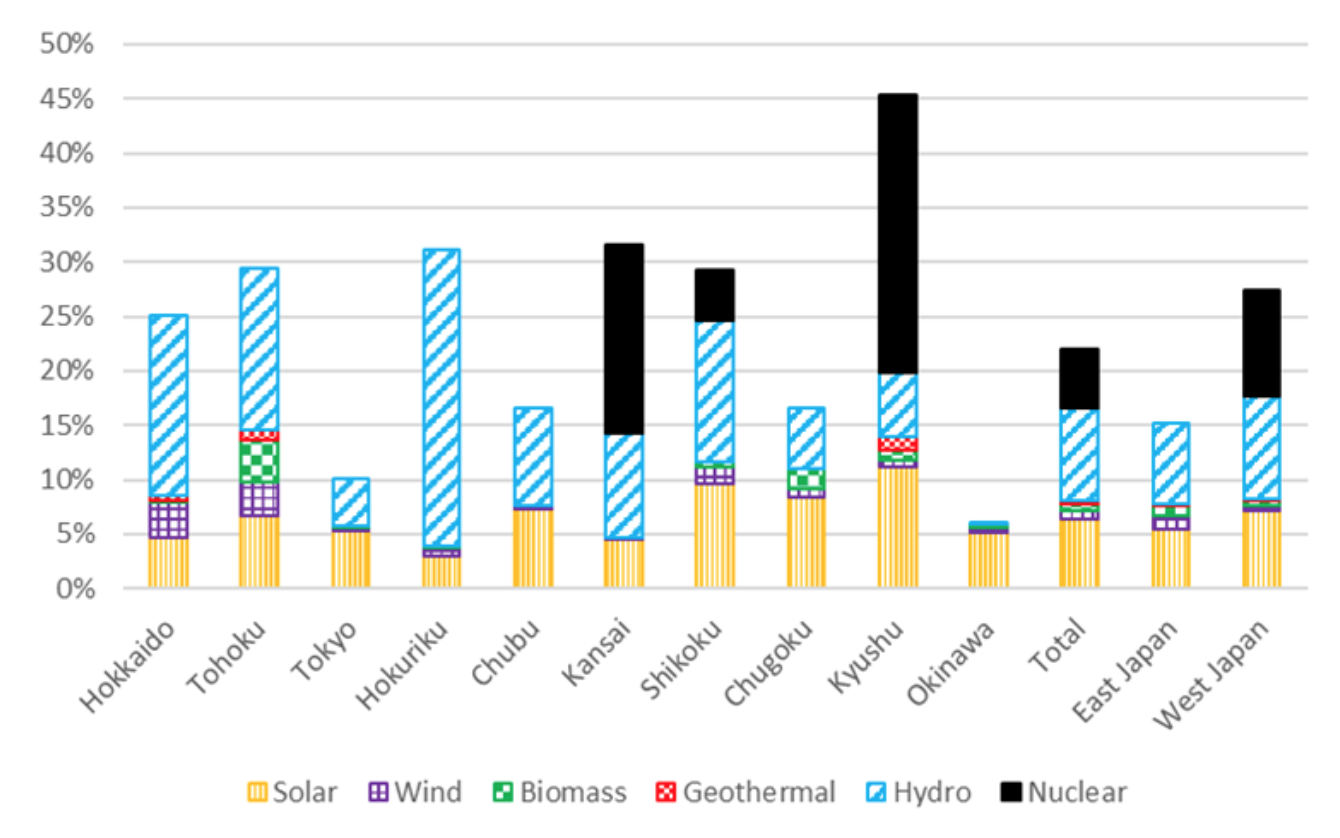 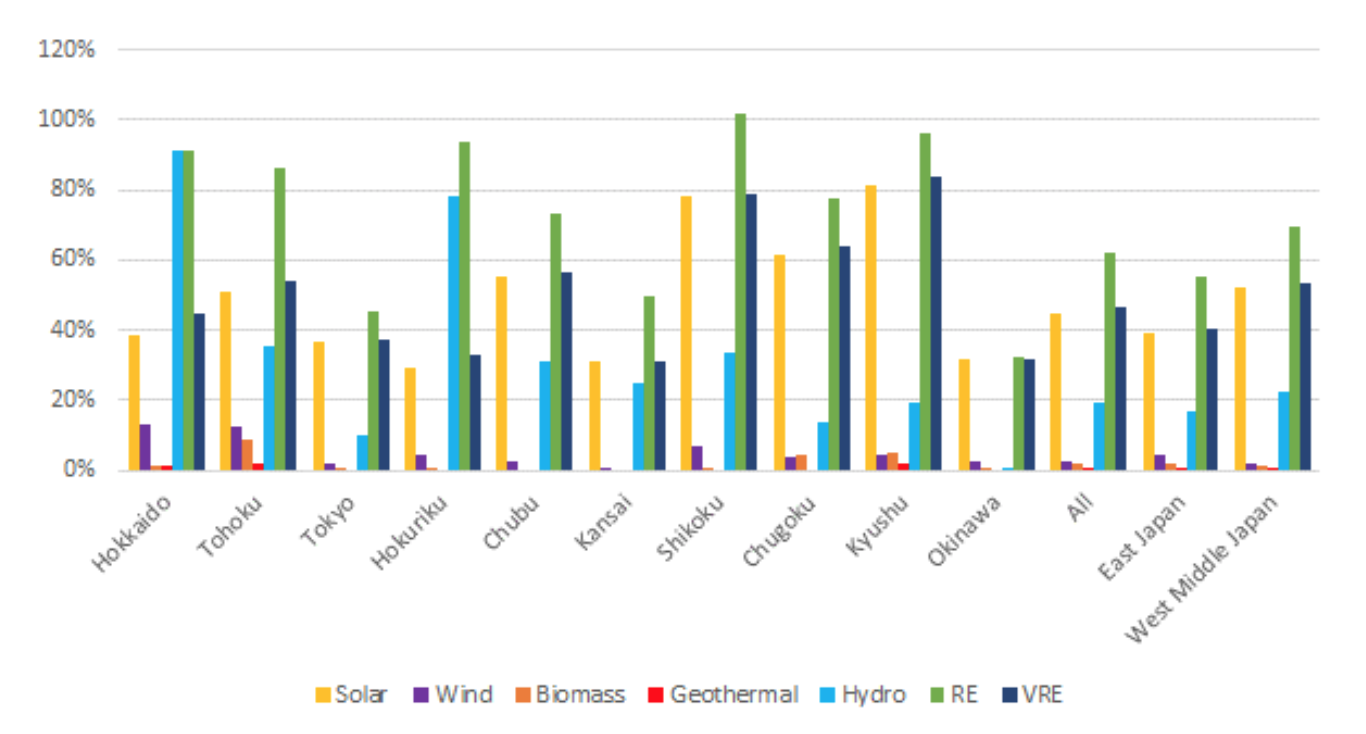 Kyushu Electric Power, which is the most advanced area in Japan for the penetration of solar power generation, saw the share of renewable energy to annual electric power demand increase to 19.9% ​​in 2018, and that of solar power has reached 11.1%. While the share of VRE is also the highest in Japan at 11.8%, four nuclear power reactors, about 4GW output, already re-started last year, which cannot basically adjust their output.

In Kyushu, the share of nuclear power to annual power demand has reached 25.5% in 2018. As a result, based on the current priority feeding rule, the power curtailment of solar power generation was carried out for the first time in Kyushu, Japan on October 13th, 2018 (Saturday).

On the other hand, in September 2018, ISEP proposed improvements to be made before curbing renewable energy output [6]. A total of eight time output curtailments were carried out during 2018, but on October 21 (Sunday), a maximum of 920 MW of power curtailment against solar PV was carried out, and the curtailment amount was one day by solar PV reached about 14% of the power generation as shown in Figure 6. 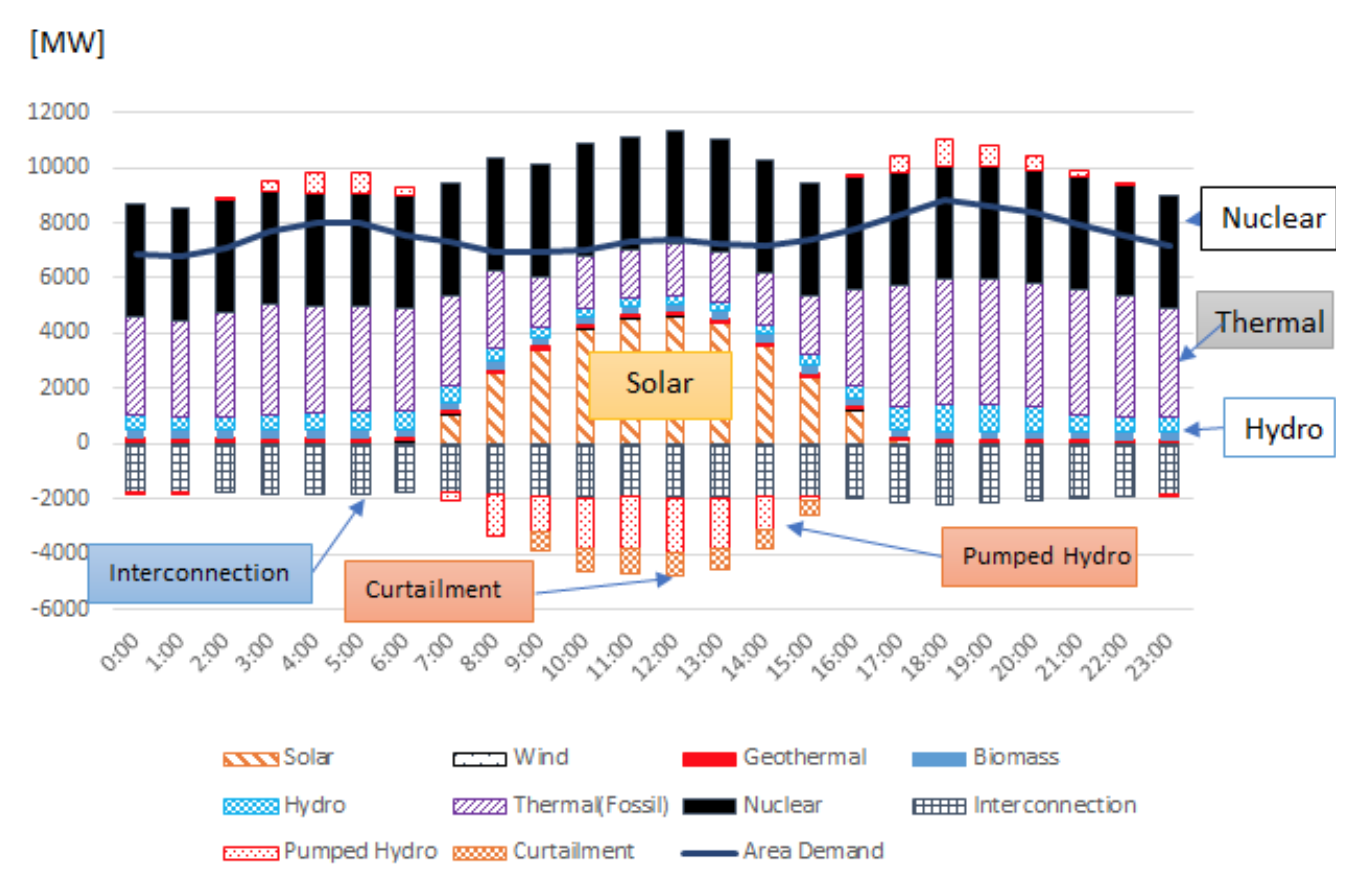 Comparison of the share of renewable energy with European countries

The share of renewable energy of power generation in 2018 was compared with European countries and China as shown in Figure 7. Many European countries have already supplied more than 30% of their annual energy production with renewable energy. The share of VRE is also over 20% in Germany, Spain, Portugal and the UK, with Denmark leading more than 50% while Japan still around 7%.

With regard to the policy targets for renewable energy, European countries have set high share targets for 2020, 2030 and 2050, and are promoting various energy policies in each country. In Europe, the national target of renewable power in NREAP (National Renewable Energy Action Plan) has already reached many countries in 2020 as shown in Figure 8. As for the target of renewable energy in 2030, it is announced in Europe that the renewable energy share will be 32% or more against the final energy consumption, but with regard to renewable energy power, Denmark and Spain have already set 100% target in 2030. It has set a high goal of 65%. compared to these countries, Japan’s target of 24% in 2030 has reached 17%, and it can be said that it is a much lower target even considering that solar power has almost reached 7% of the target. 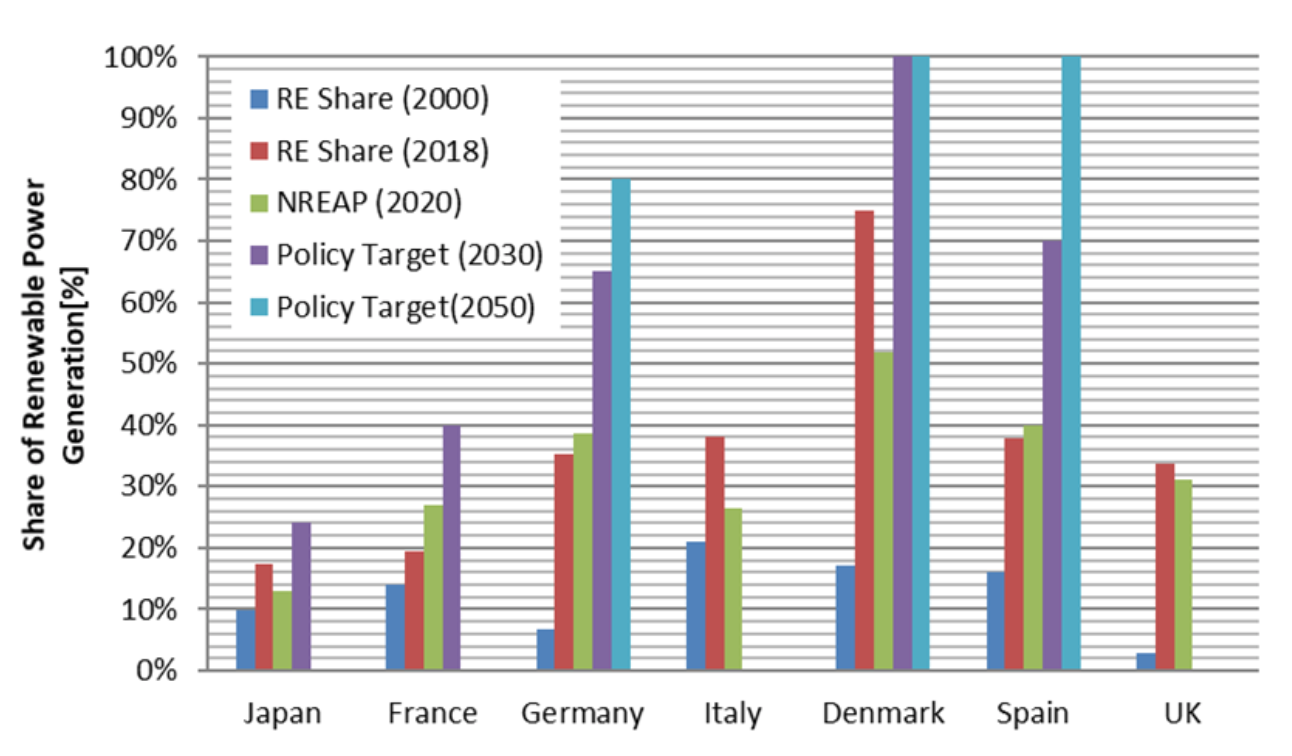